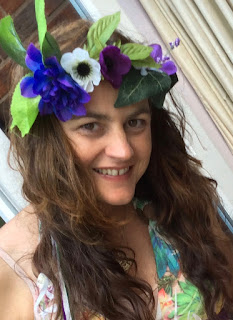 My name is Faye and I am very passionate about connecting with nature spirits. I practice earth healing, connecting with the elementals in the etheric realms and the elements in the physical realm to bridge the gap between the worlds.

I started doing hands on healing about 20 years ago, it was around this time that I learnt how to play the didgeridoo too. It was more recently, in 2010, when I was living in the Findhorn Foundation, a community in North Scotland famous for connecting with nature spirits, that I got a message to combine the two. After I left Findhorn, I found a course and have a certificate in didgeridoo healing, and did a workshop on sound healing, I use this in my work as well as following the guidance of spirit.

I trained in reiki and with the national federation of spiritual healers. In 2001-2003 I trained as a dramatherapist and have a post graduate diploma in dramatherapy. I have also studied with a healer who is a homeopath and doctor, who taught me how to read the aura of people through an aura diagnosis course. I now read the auras of plants, trees and flowers and make my own remedies. The spirit of the plant guides me to make the remedy and gives me a message about what it is to be used for.

In 2011, I went to Guatemala, to the mystic yoga farm and received some teachings there. Following this I studied for three months at the pyramid centre, in San Marcos, Lake Atitlan, this included studying yoga, meditation, tarot, numerology, astrology, healing with crystals, channeling and the kabbalah's tree of life. This three month retreat included an intensive 40 day silence based on self study of the tree of life and meditation.

I have also done a considerable amount of travelling over the last ten years. I have visited Sweden, Germany, France, Spain, India, North, Central and South America, (inc. Hawaii, Mexico, Guatemala, Belize and Peru), Canada, Australia and New Zealand. I have often sought out what was happening spiritually in these places and wanted to understand how the 'natives' would have experienced the world of spirit and healing. I had many exciting, illuminating and interesting adventures, but that is another story for another day.

I use the skills I have acquired from all these experiences and trainings that I have undergone and draw from all of these different modalities in my work.

Email ThisBlogThis!Share to TwitterShare to FacebookShare to Pinterest
Home